Forlong Medical is one of the leading professional suppliers for high quality medical disposables, founded in 2010.

You are here: Home » News » Industry News » How does an ultrasound scan work?

How does an ultrasound scan work?

Ultrasound scanning now is a widely used clinical tool in providing images of internal fetal anatomy. A number of families are using it to see what does their baby like and what is he or she  doing in the mother’s womb. 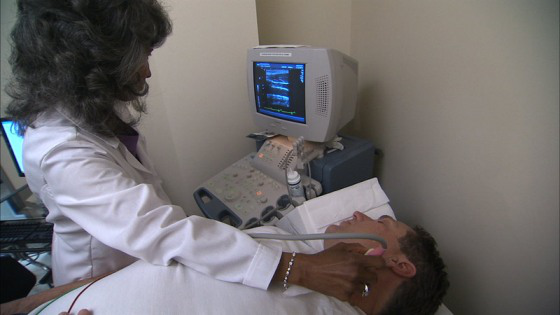 Ultrasound scanning is also called sonography because it uses high-frequency sound waves to produce images of slices through the body. The term "ultrasound" refers to sound with a frequency that humans cannot hear. The denser the object the ultrasound hits, the more of the ultrasound bounces back.

The transducer probe is th­e main part of the ultrasound machine. A transducer or probe which emits ultrasound waves is placed on the skin after coating it with a thin layer of conductive gel, to make sure the waves pass smoothly through the skin.  The transducer probe makes the sound waves and receives the echoes. It is, so to speak, the mouth and ears of the ultrasound machine. The emitted ultrasound waves are reflected by different structures encountered by the waves. The strength of the reflected waves, and the time they take to return, form the basis for interpreting the information into a visible image. This is performed by computer software.

The CPU is the brain of the ultrasound machine. The CPU is basically a computer that contains the microprocessor, memory, amplifiers and power supplies for the microprocessor and transducer probe. The CPU sends electrical currents to the transducer probe to emit sound waves, and also receives the electrical pulses from the probes that were created from the returning echoes. The CPU does all of the calculations involved in processing the data. Once the raw data are processed, the CPU forms the image on the monitor. The CPU can also store the processed data and/or image on disk.

For diagnostic uses, the ultrasound is usually between 2 and 18 megahertz (MHz). It can help diagnose problems with soft tissues, muscles, blood vessels, tendons, and joints. It is used to investigate a frozen shoulder, tennis elbow, carpal tunnel syndrome, and others.

Most types of ultrasound are noninvasive, and they involve no ionizing radiation exposure. The procedure is believed to be very safe.

With other computer technology, ultrasound machines will most likely get faster and can store more data than today. Transducer probes may get smaller, and more insertable probes will be developed to get better images of internal organs. Today, we already have 2D, 3D, 4D Ultrasound scans.  And it is likely that they will be highly developed and becoming more and more popular.

We offer a wide range of products to meet your needs in the medical field. Read More >>